During the season of giving, there is momentum building for local food drives, fundraisers, and volunteer events to help give back to our communities. We truly see the impact that can be made when groups of people come together to empower an idea. In the case of Sherman’s Apothecary, this opportunity begins with pumpkins! Sherman’s resides in the small town of Salinas, California, widely known as one of the state’s most favorable agriculture regions. This gave leeway for one of the store’s pharmacists, Brian Rozema, to experiment growing pumpkins in his garden. His goal in harvesting the pumpkins was to support a passion for animal advocacy and fundraise for local animal welfare agencies. Beginning in 2016, Sherman’s became the storefront and a matching sponsor for these pumpkins. Owners, Jeff and Mindy Sherman, shared, “When Brian approached us about the idea, we thought it was a wonderful way to raise awareness for our furry patients since we also compound for pets. The opportunity helped us reach animal lovers out in the community and start off the fall season with a fun and positive impact.”

The fundraiser takes its course in mid-September, as soon as the crop is ready, and lasts throughout the month of October. The process would kick-off with Brian unloading his truck of around 300 pumpkins and the team setting up a display in the center of the pharmacy’s front-end retail space. To help spread the word, Jeff, Mindy or Brian,

would take to social media to advertise to the community. Given the power of small community, this news spreads quickly across the valley through word of mouth and typically receives several shares and post interactions online. Before they knew it, inventory would become smaller by the day until they would eventually sell out!

During the first couple of years, $1,000-$2,000 was raised for a designated charity that was selected. As traction continued to build each year, the team was able to gain the support of additional small business sponsors throughout the community and the fundraising event even earned its own name: Pumpkins 4 Paws. To date, receives matching donations from six sponsors: Salinas Valley Dental Care, Animal Cancer Center, From the Heart Dog Training, Animal Hospital of Salinas, TLC Dentistry, and our very own WSPC member, Sherman’s Apothecary. With the help and contributions from these partnerships, this year $14,280 was raised for the Animal Friends Rescue Project, and over $42,000 has been raised since its origination. Over the years, this effort has been able to give back to several of local charities such as the SPCA, FOCAS Monterey County, Animal Friends Rescue Project, and Peace of Mind Dog Rescue. Mindy and Jeff commented, “It has been incredible to watch Pumpkins 4 Paws grow into something beyond what any of us could have envisioned. What began as a heartfelt and fun way to give back, has turned into a large effort across our city. We have an extremely generous community that is always willing to play a part in an effort to help; and for that we are so grateful to live in and be a part of.”

Mindy and Jeff are also paw-parents to three-year-old pups, Remington and Bentley, who serve as the pharmacy’s therapy dogs. These two are always ready to greet you as soon as you walk through the door, keep you company while you shop, and help you stay calm when receiving a vaccination. The owners left us with these final remarks, “It feels great to give back to animals that so effortlessly give us therapy and love. We feel grateful to Brian for a gift that matters so deeply to us, our patients, and pets. We like to think Remington and Bentley are thankful for helping their friends too.” 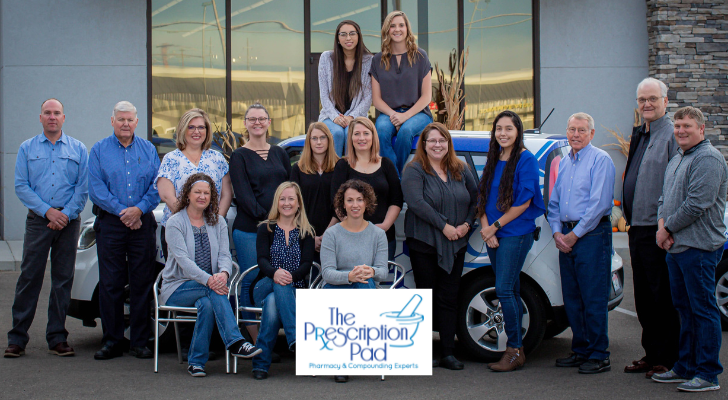